Imran Khan says US is responsible for Terrorism in Pakistan 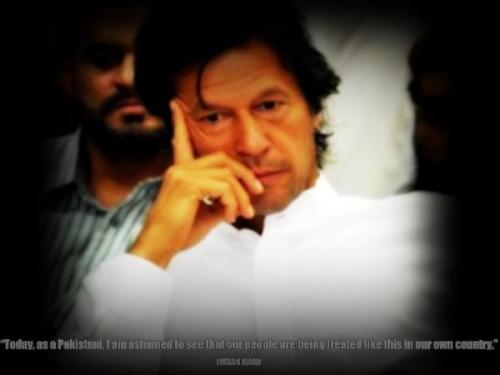 “Pakistan Tehrik-i-Insaf (PTI) Chief Imran Khan declared the government of Pakistan a slave of the US and added that the ongoing terrorism in the country would continue until Washington stopped meddling in the internal affairs of Islamabad.” -PTI

Imran Khan said the above quote in a press conference after the twin suicide bombings at the shrine of an Islamic scholar and a sufi saint, Hazrat Data Ganj Baksh in Lahore.

The dilemma I am facing is that how come the anti-muslim, the neo-con, Islamophobic, American Supremacist element has given complete impunity to Imran Khan!! I mean that is pretty freaky. What is going on behind the scenes??? Places where ZakirNaik (a Muslim Telepreacher) gets banned, Imran Khan has Freedom!!!! How Come???

Imran Khan has given countless statements regarding the Pak-US relations that can qualify him to be labelled as Anti-American by the american Right. However, I have not come across any opposition to him in this respect. Where criticizing American policy of drones attack in Pakistan, and opposing military escalation in Afghanistan can cause political failure for the politicians, where Mr. Zakir Naik can get banned for opposing the NATO’s aggression in the South Asia (as perceived by overwhelming majority of the South Asians), where Tariq Ramadan was banned from travelling during Bush era, Mr Imran Khan is free to travel and speak in any city and platform of his choice in US, Canada and Europe.

Imran Khan is perceived in Pakistan as a centered Rightist. He sometimes criticize US policy of war mongering, sometimes lambast the established Pakistani parties and its leadership for being subservient to the USA, and some other times quotes Hadith (sayings of the Prophet Muhammad) as the guiding principles that should be followed and implemented in Pakistan. He also refers to the Islamic Ideology of Pakistan, and as I have noticed from few of his speeches, he walks on the thin line of not being called an Islamist (which makes me even more critical of him).

With all this mumbo jumbo, he has freedom to speak all this at any given platform in the West and in the East. I am not an anti-Imran or anti-PTI, in fact I have used his interviews in many of my writings because on many occasions he talks sensible in the not so sensible political arena of Pakistan. However, the more I am following him, the more I am having fishy feelings about him and this post is the first expression of that fishy feeling.

So somebody please explain to me, what is going on behind the scenes? How he has freedom to say that others are barred from? What is the real face of Mr Imran Khan, and what is his job in the political establishment of Pakistan??