Please watch this video, and extend your hand of help. After video, you can find the quick instructions.

Please click this link to donate if you are America. Choose one of the options of amount. Make sure “Designation” says “East Africa Crisis” and then click ‘Add Donation.’ You can then fill out your information.

If you live in another country, please click at this Islamic Relief World link and see how if you country flag. If its not their either, find your national organization that is Answering the Call. Please help in raising awareness!

On January 17, 2010, the Washington Post, one of the top US Newspaper, published an article by Griff Witte entitled “Poor schooling slows anti-terrorism effort in Pakistan.”  The article contained some serious misinformation, and misrepresentation whether intended to be or it just happened to be there by accident.  Below are what I think important ones to be discussed.

The Problem and US Aid:

The problem of the Pakistani Education System[1] is known by Pakistanis, and it is a recognized problem. For decades the United States has funnelled US Tax Payer’s Dollars to mainly Pakistani Army in “aid” and either to the corrupt “democratic” government or to the US sponsored Dictatorship in Pakistan!

For the first time in the history of this Pak-US alliance, US President Obama will be sending US $ in “aid” not for the Pakistani Military but instead for the Educational System of Pakistan!

So Washington Post in regards to this very seroius problem in Pakistan- which is ignored by the corrupt elite, the so called Democratic governments, and also ignored by US sponsored Dictatorships- has just further increased the misconception of the Americans.

American Public is very ill-informed about Pakistan and has many misconceptions about Islam. Thanks goes to the American Media, that is designed or has happened to evolve is such a way that the usual reportings on these topics are just based on bunch of lies, phobias, assumptions and generalizations. Washington Post, NY Times, Chicago Tribune and many more mainstream newspaper mediums share some what the same amount of “problem” relating to reporting the issues in the Muslim World, in particular of Pakistan in this case.

Examining the Article & the Real Issue:

END_OF_DOCUMENT_TOKEN_TO_BE_REPLACED

America’s Aid or Charity- Why Do Pakistanis Oppose US Charity

The following is the long comment that I posted at this Blog “Zainab Jewaanjee”. I thought this in itself can be a separate post on my blog so here it is.

Zainab wrote:
[…]Finally, your comment on the States not spending “a dime to Pakistan” is an interesting concept. AID is increasingly seen as of little value and there’s skepticism of American assistnace in particular.

Right the skepticism about the US aid and its declining public support is primary because US gov likes to give charity not aid. See there is a differece, at least to me.

Charity is you give it away feeling sympathetic or for some other reason, tomorrow that person is back on the street asking again. You have changed nothing!

Aid is that you do something so that tomorrow that person is not back on the street but instead is now capable to find his/her own way.

Well known Muslim Economist from Bangladesh, Muhammad Yunus once said that the concept of Chariy today is totally un effective and doesn’t solve the core problem, since the next day the person is on the street.

So why US “aid” doesn’t get support. Well look where this so called aid goes.

1] Pakistan Military- Pak Military already gets the most of the Pakistan’s Budget itself. More “aid” from foriegn gov for defence. Don’t see how that works when US has military deals with next door rival India (the nuclear tech agreement of Bush, even though India is not a member of Nuclear Prolifiration!!) 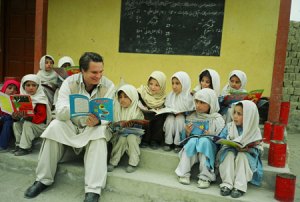 2] Madarsa Reform- recently US aid was given to reform Madarasa. Where is the sense in that. Any one who is on the street, nows that that is not the priority of the people. Moreover, Madaris are the product of the failure of Pakistanis Gov. Gov’s inability to reform its national educations system. Why not reform the private schools who are producing self hating Pakistanis and anti-Islam????

In both condition, the people remain poor, exploited by the corruption, thug and weapon (asla) culture, voting is bogus we all know that even if US observors sit in Islamabad. Youth is unemployed.

What the “aid” has changed is the common Pakistani ask!!

And so I call it Charity.

So what do I suggest US should do? United States should not waste its money. If US wants productive results in Pakistan, give the Education Ministry of Pakistan, and keep a close eye. Let the Pakistani Parliament and Scholars/ Policy shape the Education policy of Pakistn.

Madrasa Reform through charity would only waste the money and isn’t and won’t change any thing. It is not something very hard to be understood. Its a very simple concept.