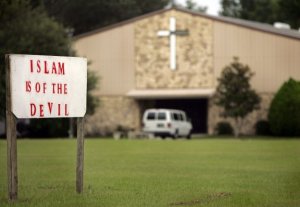 Islamophobia is rising at a very alarming rate in the West and in particular the United States. Niqab bans and Minaret bans in Europe aside, and ignore recent ‘Draw Muhammad Day‘ campaign, there are news and events that do not make it to the global scale or even national level. That, however, does not mean that it can be ignored.

Allow me to provide you with these links. Dates might not be the exact day of incident as I got it from the earliest mentioning online site. Sit tight, hold your hearts for the time has come to keep your naive minds aside:-

Dan Finelli Ad: (on May 5th 2010) Mr Dan Finelli is a Florida Republican, new to the field of Politics. He is running for the 8th District seat and he ran 3 ‘bold’ actually racist and Islamophobe campaign ads. Showing brown person as a terrorist and a white man as a peaceful person! Mr. Finelli showed his ignorance by refusing to acknowledge that the suicide plane attack on an IRS facility in Texas, the shooting of Pentagon guards and the Christian militia plot to kill police officers (arrested in Michigan) were by “Whites.” DON”T STOP here! There is more below!!!

END_OF_DOCUMENT_TOKEN_TO_BE_REPLACED

FBI raids on the Hutaree Christian militia brought to light this formerly little-known group based in Adrian, Michigan.

Unlike the generally secular white supremacist organizations, Hutaree are explicitly Christians. Many seem to be millenarians, expecting the end of time to come soon. Like the so-called Patriot Movement, they are gun nuts. They are said to be organized to kill the Antichrist, and some reports say that they planned violence against American Muslims.

END_OF_DOCUMENT_TOKEN_TO_BE_REPLACED 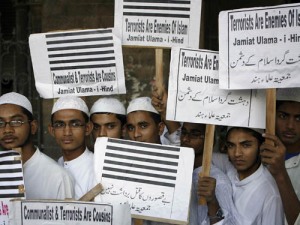 KARACHI, Pakistan — The American-born spokesman for al-Qaida has been arrested by Pakistani intelligence officers in the southern city of Karachi, two officers and a government official said Sunday, the same day Adam Gadahn appeared in a video urging U.S. Muslims to attack their own country.

The arrest of Gadahn is a major victory in the U.S.-led battle against al-Qaida and will be taken as a sign that Pakistan is cooperating more fully with Washington. It follows the recent detentions of several Afghan Taliban commanders in Karachi.

Gadahn — who has often appeared in al-Qaida videos — was arrested in the sprawling southern metropolis in recent days, two officers who took part in the operation said. A senior government official also confirmed the arrest.

END_OF_DOCUMENT_TOKEN_TO_BE_REPLACED

No Terrorism Threat Now? Only Because he is not Ahmed or ibn qasim!

An idiot from Bethesda. Pict taken from Washington Post

I came to know about this today. Yes 5 days after this news was reported. That a 20 yrs old guy from Bethesda named Collin McKenzie-Gude was convicted for trying to assassinate President Obama back in 2008 when we was running for elections.

What, I remember when this Christian Preacher down south was preaching in his church and in an interview in a radio station that he hope Obama dies. This is also back then, when President Obama was running for President.

So no fear of terrorism now! No mention what motivated him to try assassinate President Obama in 2008!