Kyrgyzstan, a Central Asian country and an ally of the United States, is facing law and order situation in the southern Kyrgyz city of Osh and Jalal-Abad. 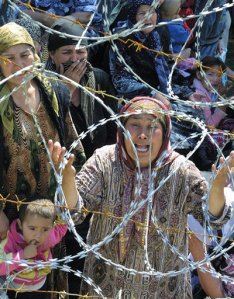 Uzbek woman Matluba at the border along with other refugees. Source: AP

The mob of ethnic Kyrgyzs, armed with guns and metallic rods stormed the city of Osh and Jalal-Abad, setting up the houses of the Uzbeks on fire, and looting and killing Uzbeks. Neither police nor the army has been able to control the situation. The Kyrgyz government requested military assistance from Russia, which is denied because of the Collective Security Treaty Organization. Thousands of Uzbeks have fled to the border of Uzbekistan for safety are in presently in END_OF_DOCUMENT_TOKEN_TO_BE_REPLACED