Khalifah ‘Umar ibn al-Khattab was truly a genius. He was a natural leader and had a great political acumen. Following are few examples to briefly explain this point.

Khalifah ‘Umar had established an inquiry commission to ensure that his governors and other state officials abide by the rules and do not transgress a tiny bit. The Chief Inquirer was END_OF_DOCUMENT_TOKEN_TO_BE_REPLACED

How to deal with people that argue with doubts from the Qur’an?

Love for Muhammad entails love for his Sunnah

END_OF_DOCUMENT_TOKEN_TO_BE_REPLACED

What Muhajir and Pathan Can Learn From the Qur’an

By Umer Sultan| “Lets move from the Jahiliyyah to the nobility of Islam!” 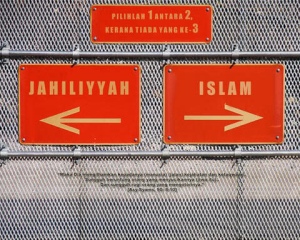 I am not talking about Syria in which the government forces are shooting down the Muslims praying in the Mosques. I am talking about the situation in Karachi in which over 300+ people have died and counting, where the city has been hijacked by mainly two secularist-ethnic nationalist parties-ANP- Awami National Party (Pathan) and MQM- formerly Muhajir Qaumi Movement (Muhajir). Target killings are the norm in the city, and the sins of the dead & their families is that they belong to one of the two ethnic groups- Pathan or Muhajir, or they happened to be the bystanders, where as, the PPP-Pakistan Peoples Party, is having a low-profile in the conflict.

Pathan are Pashto speaking people from the North Western region of Pakistan neighboring Afghanistan. Muhajir are Urdu speaking people who migrated from India to Pakistan. This insanity is also part of  the Global War on Terror. The MQM that claims to uphold the rights of Muhajir has END_OF_DOCUMENT_TOKEN_TO_BE_REPLACED

END_OF_DOCUMENT_TOKEN_TO_BE_REPLACED

The Naseeha of Abu Bakar to Umar on his deathbed

When Abû Bakr Al-Siddîq was on his deathbed he called ‘Umar – Allah be pleased with them – and said:

Hadith 26: Speak Good or Keep Silent and Be Courteous and Generous

via The Key To Power

Hadith 16: No Excuse For Deviation And Innovation

Umar ibn al-Khattaab, rahimahullaah, said:”There is no excuse for anyone going astray thinking that he is upon guidance. Nor for abandoning guidance thinking it to be misguidance, since the affairs have been made clear, the proof established [1] and the excuse cut off.”[2]That is because the Sunnah and the Jamaa’ah have consolidated and safeguarded all of the Religion. It has been made clear to the people, so it is upon the people to comply and f … Read More

via The Key To Power

With the incompetency of the present Pakistani administration, and the resulting deterioration of the Pakistani society, Musharraf’s announcement has fulfilled his fan’s hopes. However, there is a concern among many others. The tenure of Musharraf as the dictator of Pakistan was not the era of idealism in the history of Pakistan as Musharraf might have envisioned. His idealism of Enlightened Modernism came back to hound him and led to his resignation in order to avoid the legal consequences of trashing the Pakistani constitution.

That history aside, I have my own concerns. I liked Pervez Musharraf when he took over Pakistan in a bloodless coup in 1999 and I still do for his personality. He has the leadership skills but his ideals and principles are very worrisome.

If Musharraf would run for the Presidency of Pakistan, people will vote him (actually his party) for his personality not for his (or his party’s) ideals. This is the mental plague the Pakistani people are facing today. The problems of Pakistan will never resolve if this mentality of hero-worship continues. People of Pakistan should look at the ideals & principles of the man and party before they vote.

A] His ideals include Enlightened Moderation:-

In the words of Pervez Musharraf:

“The world has been going through a tumultuous period since the dawn of the 1990s, with no sign of relief in sight. The suffering of the innocents, particularly my brethren in faith — the Muslims — at the hands of militants, extremists and terrorists has made it all the more urgent to bring order to this troubled scene. In this spirit, I would like to set forth a strategy I call Enlightened Moderation.” The Washington Post June 1st 2004, A23.

He explained back in 2004 that this strategy is two-fold. First are the Muslims and that they have to shun violence, and extremism and that they need to be moderate in Islam. The second part of the strategy is the West, especially the United States that it needs to deal the issues of global politics with justice.
END_OF_DOCUMENT_TOKEN_TO_BE_REPLACED

Islam Hijacked & People Brain Washed: In the name of Sufism!

Islam is very simple religion (religion in the non-traditional meaning) and has very simple and clear believes. The problem comes when it the noble teachings of Islam is mixed with customs and traditions of the culture, and when that takes precedence over the teachings brought by the Seal of the Prophethood Muhammad ibn Abdullah (May Allah have mercy on him).

Below are the freeky pictures from the practises of some mystic (sufi) order Rifai in Jordan that I just received, where they have adopted some major body piercing as a way to celebrate the birth of the Messenger of Allah, Muhammad SAW. 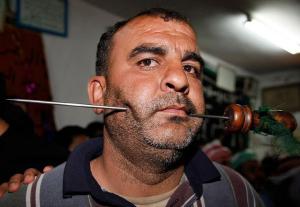 Oh My Lord, We seek your guidance

1st] I am not a scholar in Islam but I know that this is clearly against the teaching of Islam!!! Islam infact condemns hurting oneself, for example hitting or beating oneself, or cutting parts of one’s own body (& others) let alone this kind of body piercing! [Oh Allah show us all guidance Ameen]

END_OF_DOCUMENT_TOKEN_TO_BE_REPLACED

Today I finished reading the book by Iain Adamson “Mirza Ghulam Ahmad of Qadian” published by Elite International Publications in 1989.  Before I dive into my thoughts on this book, I would like to present here brief info regarding who Mirza Ghulam Ahmed Qadiani was.

Mirza Ghulam Ahmed Qadiani was born in Qadian, India on February 13th, 1835 (Iain Adamson) or in 1839 or 1840 (Qadianism by Hasan Ali Nadwi).  He was a public debator, preacher, and spent most of his youth in debating Christian missionaries and Hindu group Arya Samaj.  He defended Islam, became famous in those bad times when Muslims had lost the War of Independence of 1857.  Many Islamic Scholars and leaders who participated in the freedom struggle were hanged by the imperial British governemnt and series of political, social and cultural crackdown was undertaken in order to minimze the possible uprising by Indians, especially by Indian Muslims.

In this era of despair, Mirza called himself a reformer (Mujaddid) and then called himself a Promised Messiah.  He started preaching that Isa ibn Maryam, Jesus Christ (Peace and Blessing be upon him) had died and that God had sent him as a Promised Messiah to unite all the religions and bring peace to this world.  This angered Christians and Muslims both, because both hold the belief in the Second Coming of Jesus Christ.

When he had enough supporters and financial stability, he declared that instead of inspirations from God, he started receiving revelations from God and that in those revelations God revealed to him that he was a Prophet in Islam.  Mirza declared that although Prophet Muhammed (Peace and Blessings be upon him) was the last Messenger of Allah (God) with the final Shar’iah (code/way of life), he is the chosen one- a prophet, a Promised Messiah-  and he claimed to affirming to the Sharia of Muhammad without abrogating any thing from the teachings of Muhammad!